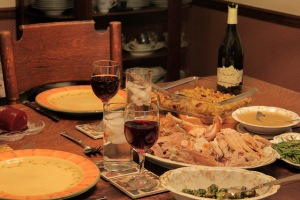 Thanksgiving 2015 was a bit different for us.

For the first time, we spent the weekend alone. Just the two of us.

Prior to children, we had a holiday tradition. Thanksgiving was spent with my parents – and Geoff’s family was invited. Christmas Eve was spent with his grandmother, who prepared the Italian vigil – and my parents were invited. And Christmas Day was spent at his parents’ house with everyone in attendance. We were fortunate that the two families lived close by and enjoyed one another’s company.

Once we had children and moved to Kansas, however, we would host the holiday feasts, and all children and grandparents gathered around our family table.
But this year all the children had plans of their own – and all parents have passed on. It was just the two us around the dining room table.

However, I fielded several calls and texts from all three children throughout the week asking for various recipes and food directions. And it warmed my heart they cared enough about the traditions to carry them forward. But I wondered if there might be an easier way. Perhaps a Pinterest board (?)

And then I wondered if others might be interested in Totoro family recipes and traditions. So I decided to embark on a new blog series. I’m not sure how long this will last, or if it will benefit anyone other than my own children, but I plan to post old family favorites and where possible, the story that lies behind each recipe. I hope you enjoy.

I don’t remember where I first found this recipe. It was shortly after we moved to Kansas, circa 1990, and I vaguely remember finding it in an old recipe book my grandmother gave me.

I do not come from a family of bread makers (how I wish I did…) so I was drawn to this one  because it uses frozen bread dough.

Since I no longer have the original recipe, I will try to recreate as close as possible here, and then detail my modifications below.

As my son noted this year, the difference is in the rolls. 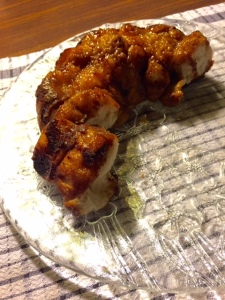 I happen to use Rhodes Rolls – although I don’t know if the  brand is only available in this part of the country. I have learned, however, that using rolls rather than a loaf of bread facilitates the process. Rolls thaw faster, meaning I only have to remove them from the freezer about an hour before prep time… and rolls are easy to cut. I cut each roll in half, and then in thirds, for a total of six pieces.

When making  monkey bread for a crowd, I can typically use 16-18 rolls for one bundt pan. The rolls rise to the top of the pan overnight, and then bake slightly higher in the oven.

When preparing the recipe for just a few people, however, using a dozen rolls is ample.

No matter the crowd, however, there are rarely leftovers. The recipe is simply that good. Which is why we only make it once a year.

Feel free to contact me:
mstermind1 at gmail dotcom